With the return to our usual publication schedule, we also return to our Gandy Dancer duty—that is, to forge connections between writers and readers across the SUNY system. It seems, in that same vein, the theme of connection (and the lack thereof) has become the central one for this issue. Though never outright intentional, it’s always exciting and rewarding to find what commonalities the year brings out of our writers’ and artists’ work. It does not seem out of place that, in this moment, the idea of attempted connection and consequent alienation is something our contributors have focused on. This alienation is reflected in different ways: alienation from others, alienation from place, alienation from society, and, ultimately, alienation from self.

On that note, we feel compelled to give a nod to the common thread in the majority of our poetry this issue: sex. Yes, we know it’s there and, no, it’s not subtle. In works like Kiel M. Gregory’s “Emotionally Compartmentalized Lovemaking is Called Fucking,” the poet explores the nature of intimacy, or imagined intimacy, inherent to the act of sex. It seems to us that this emphasizes the alienation one feels from other people emotionally; as in, two people can be touching and not connecting. Gregory, in that way, remarks on how real a supposed connection can feel in the moment; he concludes his poem with a lover claiming she won’t disappear, but then his speaker is suddenly overwhelmed with the feeling that “…her words seemed out of place; / a foreshadowing [he] denied.”

While this issue’s poetry discusses the desire to connect to other people, the prose seems to express the desire to connect to the surrounding world. DongWon Oh’s “Troubles of Ants” describes the experience of being a draftee in the South Korean army, and how the removal of young Korean men from society for their military service erases their individual identities for that time, forcing them to eventually reintegrate into a world that has moved on without them. Similarly, the nonfiction piece “Dirty Spoons” by Renee Grasso describes a feeling of removal; in her case, though, it’s sparked by her return home after the first semester of college. Grasso knows intellectually that “of course, things had changed without [her],” but she struggles to have the new version of herself in the new version of her home.

These explorations of intimacy, alienation, and attempted connection aren’t ones you should be subject to embark on alone; in fact, we’ve enlisted somewhat of a tour guide for you, or at least a shadow you might chase from one cover to the other. The man featured in Nicholas Simenon’s “Alienation” collection invites you either into or out of the triangle of light on the front cover and, in that way, either into or out of the fourteenth issue. If you choose to follow him throughout, you will end up somewhere quite different than where you started.

Note that none of this is to say connection is impossible. The striving for intimacy is, in itself, a noble pursuit, and we believe many of our pieces ultimately ring with hope. In our opening poem “The Gland,” poet Marissa N. Quiñonez describes a very literal internal exploration. After hearing the “loud hum” coming from inside a man, “they twisted its head, / sliced open the skull, / & gaped into the gland under the moonlight.” We believe that the exploration Quiñonez writes about is one way to counter feelings of alienation. With that being said, we hope you’ll hear our loud hum and take the time to act accordingly and discover what lies within.

A Four // A One // A Three
Shantam Goyal, University at Buffalo 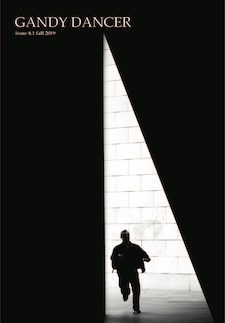